The Ukrainian Museum-Archives in Cleveland was founded in 1952 by displaced scholars who took on the mission of collecting and preserving items from Ukrainian history and culture during an era when this kind of material was being deliberately destroyed in Soviet Ukraine. Over the course of its first quarter century, the UMA compiled a huge collection that includes many rare, even unique items.

A second generation of Ukrainian-Americans assumed responsibility for the UMA in the late 1980s and have continued to maintain and enhance the collection. We developed exhibits and hold regular events, both free-standing and in cooperation with the neighborhood. Much of the work is done by volunteers.

In 1991, with the break-up of the Soviet Union and the independence of Ukraine, the UMA’s collection began to attract attention from other institutions, including the Library of Congress, the Cleveland Museum of Natural History, Ohio State University’s Slavic Studies Department and the Academy of Sciences of Ukraine. In 1998, the Government of Ukraine requested that the UMA prepare a Pilot Project that has been incorporated into the U.S.-Ukraine Agreement on the Protection and Preservation of Cultural Heritage. Within the framework of the Bilateral Agreement, the UMA, Ohio State University and Cleveland State University are collaborating on a course, Introduction to Ukrainian History and Culture.

All of these developments are complemented by the on-going improvement of the Tremont neighborhood. The UMA is working with the Tremont West Development Corporation locally, with Ohio State University on a state-wide level, with the U.S. Department of State and the U.S. Congress nationally and the Academy of Sciences of Ukraine internationally. This requires us to accept the dual challenge of contributing both to the development of the Tremont neighborhood, which is our home, and to the growing interest in Ukraine as a cultural, scholarly and geopolitical factor, which is our mission. 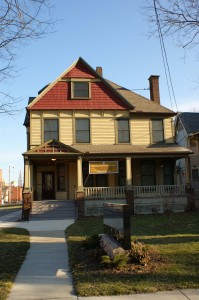